The hip joint is the largest weight-bearing joint in the human body. It is also referred to as a ball and socket joint and is surrounded by muscles, ligaments, and tendons. The thigh bone or femur and the pelvis join to form the hip joint.

Any injury or disease of the hip will adversely affect the joint's range of motion and ability to bear weight.

The hip joint is made up of the following

Bones and Joints of the Hip

The hip joint is the junction where the hip joins the leg to the trunk of the body. It is comprised of two bones: the thigh bone or femur and the pelvis which is made up of three bones called ilium, ischium, and pubis. The ball of the hip joint is made by the femoral head while the socket is formed by the acetabulum. The Acetabulum is a deep, circular socket formed on the outer edge of the pelvis by the union of three bones: ilium, ischium and pubis. The lower part of the ilium is attached by the pubis while the ischium is considerably behind the pubis. The stability of the hip is provided by the joint capsule or acetabulum and the muscles and ligaments which surround and support the hip joint.

The head of the femur rotates and glides within the acetabulum. A fibrocartilaginous lining called the labrum is attached to the acetabulum and further increases the depth of the socket.

The femur or thigh bone is one of the longest bones in the human body. The upper part of the thigh bone consists of the femoral head, femoral neck, and greater and lesser trochanters. The head of the femur joins the pelvis (acetabulum) to form the hip joint. Next to the femoral neck, there are two protrusions known as greater and lesser trochanters which serve as sites of muscle attachment.

Articular cartilage is the thin, tough, flexible, and slippery surface lubricated by synovial fluid that covers the weight-bearing bones of the body. It enables smooth movements of the bones and reduces friction.

Ligaments of the Hip Joint

Muscles and Tendons of the Hip Joint

A long tendon called the iliotibial band runs along the femur from the hip to the knee and serves as an attachment site for several hip muscles including the following:

Nerves and Arteries of the Hip Joint

Nerves of the hip transfer signals from the brain to the muscles to aid in hip movement. They also carry the sensory signals such as touch, pain, and temperature back to the brain.

The main nerves in the hip region include the femoral nerve in the front of the femur and the sciatic nerve at the back. The hip is also supplied by a smaller nerve known as the obturator nerve.

In addition to these nerves, there are blood vessels that supply blood to the lower limbs. The femoral artery, one of the largest arteries in the body, arises deep in the pelvis and can be felt in front of the upper thigh.

All the anatomical parts of the hip work together to enable various movements. Hip movements include flexion, extension, abduction, adduction, circumduction, and hip rotation. 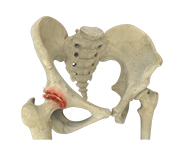 Osteoarthritis of the Hip

Osteoarthritis, also called degenerative joint disease, is the most common form of arthritis. It occurs most often in older people. This disease affects the tissue covering the ends of bones in a joint (cartilage). In a person with osteoarthritis, the cartilage becomes damaged and worn out causing pain, swelling, stiffness and restricted movement in the affected joint. 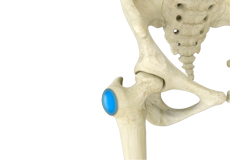 Hip bursitis is a painful condition caused by inflammation of a bursa in the hip. Bursae are fluid- filled sacs present in joints between bone and soft tissue to reduce friction and provide cushioning during movement. 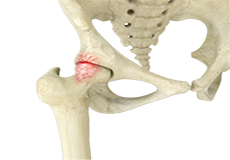 Femoroacetabular impingement (FAI) is a condition where there is too much friction in the hip joint from bony irregularities causing pain and decreased range of hip motion. 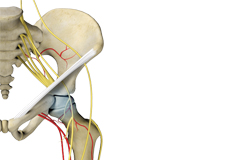 Avascular necrosis, also called osteonecrosis, is a condition in which bone death occurs because of inadequate blood supply to it. Lack of blood flow may occur when there is a fracture in the bone or a joint dislocation that may damage nearby blood vessels. Hip joint is most commonly affected; however, the knee and shoulder may also be involved. 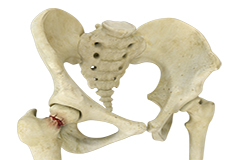 The hip joint is a “ball and socket” joint. The “ball” is the head of the femur, or thighbone, and the “socket” is the cup shaped acetabulum. The joint surface is covered by a smooth articular surface that allows pain free movement in the joint. 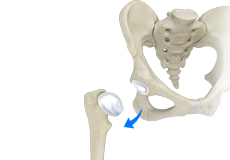 The hip joint is a ball and socket joint. The “ball” is the head of the femur, or thighbone, and the “socket” is the cup shaped acetabulum. The joint is surrounded by muscles, ligaments, and tendons that support and hold the bones of the joint in place. Hip dislocation occurs when the head of the femur moves out of the socket. The femoral head can dislocate either backward (posterior dislocation) or forward (anterior dislocation).

A hip labral tear is an injury to the labrum, the cartilage that surrounds the outside rim of your hip joint socket. 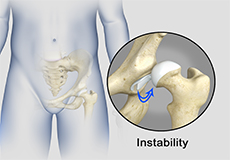 The hip plays an important role in supporting the upper body weight while standing, walking and running, and hip stability is crucial for these functions. The femur (thighbone) and acetabulum (hip bone) join to form the hip joint, while the labrum (tissue rim that seals the hip joint) and the ligaments lining the hip capsule maintain the stability of the hip. 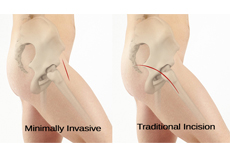 The hip joint is one of the body's largest weight-bearing joints and is the point where the thigh bone (femur) and the pelvis (acetabulum) join. It is a ball and socket joint in which the head of the femur is the ball and the pelvic acetabulum forms the socket. The joint surface is covered by a smooth articular cartilage that cushions and enables smooth movements of the joint. 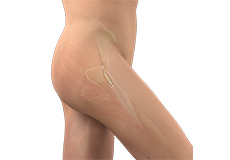 Total joint replacement surgery is one of the most advanced successful procedures in patients dealing with severe hip and knee pain. The goal of the surgery is to relieve pain and restore the normal functioning of the joint and help patient resume normal activities. 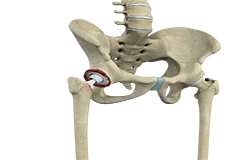 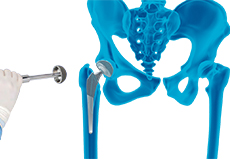 Degenerative joint disease (DJD), a common cause of hip pain, is a chronic condition hampering the quality of life of affected individuals. There are different types of DJD and the most common ones include osteoarthritis (OA), post-traumatic arthritis, rheumatoid arthritis (RA), avascular necrosis (AVN), and hip dysplasia. 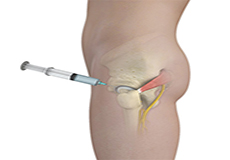 Hip joint injections involve injecting medicine directly into the hip joint to diagnose the source of pain or treat pain due to conditions such as arthritis, injury or mechanical stress of the hip joint. Hip pain may be experienced in the hip, buttock, leg or low back. The injection contains a combination of a numbing medicine and cortisone (an anti-inflammatory agent).